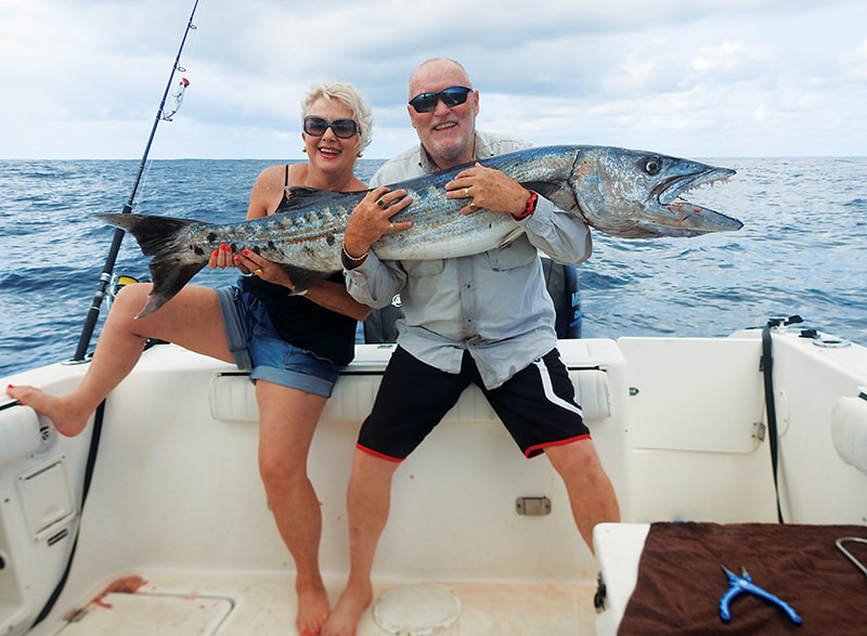 Every keen fisherman has a bucket list of species that they would love to tick off as “got one.” The giant trevally (GT) is certainly well up on mine. This magnificent fish is one of the hardest fighting fish, pound for pound, with explosive speed and amazing power created by its large tail and slab sides. So, when my wife Yvonne proposed that we spend Christmas in Vanuatu, it took me only ten seconds to say, “Yes,” that ten second delay only brought about by my need to take a breath.
Yvonne had spotted an advertisement featuring $398 return flights on Air Vanuatu. We quickly went on line to check accommodation deals, and within moments were all locked in, leaving Auckland December 20th and returning on Boxing Day.
Vanuatu is a group of 80 islands roughly 3 hours flight time from Auckland. I had fished in Vanuatu about three years previously, catching some fine mahi-mahi. This time I wanted to be more active. This time I wanted a GT.
Our flight left at the inhospitable hour of 12:35 AM, flying in a compact, but modern, Boeing 737-800 aircraft that had plenty of empty seats, so we were able to stretch out over 3 seats each and get a bit of a snooze on the way. Arriving at 1:30 AM Vanuatu time, we were met by the shuttle bus driver efficiently organised by our hotel. Unfortunately the hotel’s efficiencies didn’t extend to their own booking system. On arrival there at 2AM, we were told that they weren’t expecting us until after 4:00 PM.  Negotiations resulted in being assigned a temporary room until our poolside room became available later in the day.
Next morning, after breakfast we strolled along the recently built walkway on the beachfront past the business centre of Port Villa to reach the Waterfront Restaurant, in front of which, I was aware from previous visits, there were likely to be some charter boats plying their trade.
There we met George, skipper of the large charter launch “Nevergiveup”. I explained to George my wish to tackle GT’s, and he promptly connected me to an acquaintance  ̶   Kenny. George assured me that Kenny was ‘The Man’ for the job.
In the time it takes to drink a rum and coke, Kenny was sitting in front of us, and it soon became clear that he was indeed ‘The Man’. He was skipper of “Little Weapon”, a 26 ft Sea Fox powered by twin 150 Mercury 4-stroke outboards, operated by Island Fishing Charters. He would, thus, be able to get me in close to the breaking water around the reefs and bombies which are home to the GT. Yvonne had by now decided that she would join me for the day. Weather conditions meant that the earliest we could get out was Christmas Eve, which made me a bit nervous because it didn’t leave any back up options. But Kenny assured me that, because we would be operating in close, there would always be a lee shore suitable for our needs, probably on the other side of the island. So, we shook hands on an 8 hr booking with a pick up time of 6.30 AM.
In the meantime, we had a wonderful time relaxing, swimming and sunbathing both from the beach and at the hotel pool. Vanuatu is also renowned for its fine dining restaurants, a benefit of its French Polynesian heritage. Our favourite restaurant was Vila Chaumières which overhangs the floodlit water in which a variety of local fish can be spotted. The food there is fantastic; however, we would recommend taking plenty of insect repellent.
We also hired a car for a day and drove round the island of Efate, on which Port Vila is located. A cyclone devastated Vanuatu in 2015 and while major reconstruction has taken place, you can still see evidence of the power of the storm, including shipwrecked fishing boats and infrastructure damage. 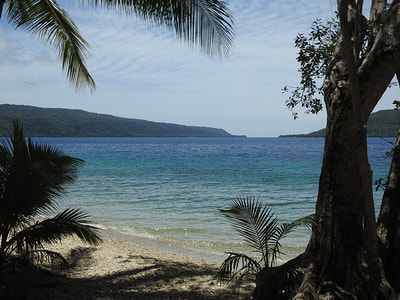 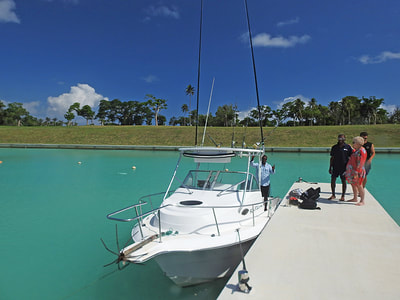 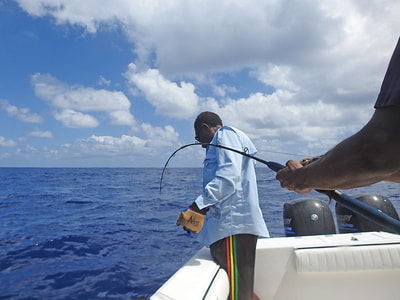 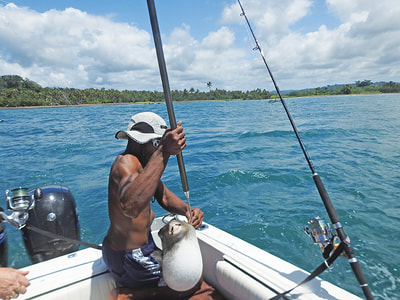 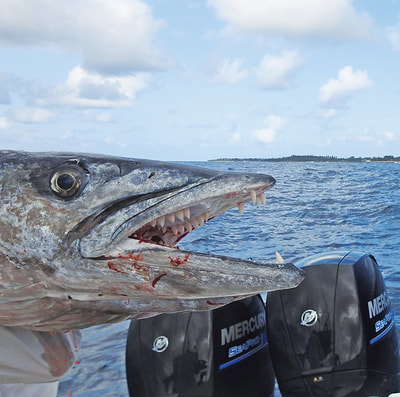 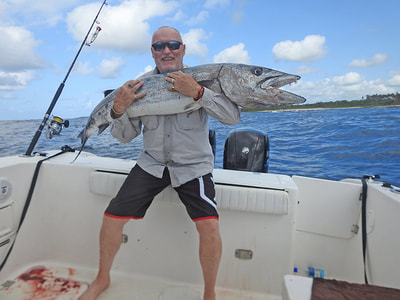 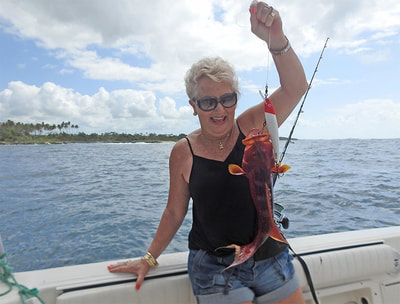 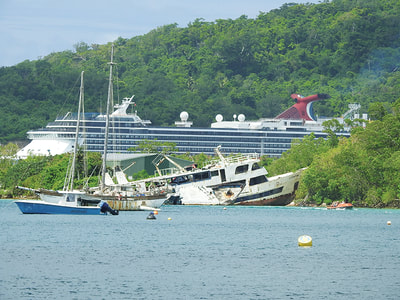 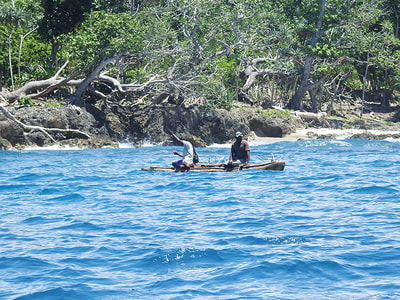 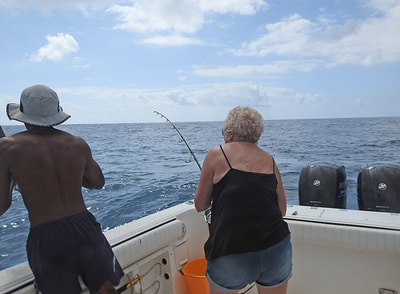 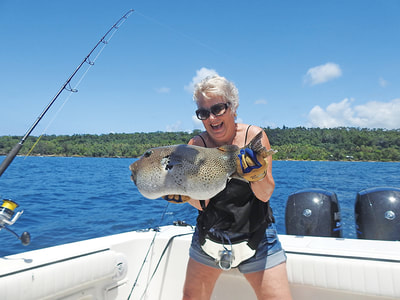 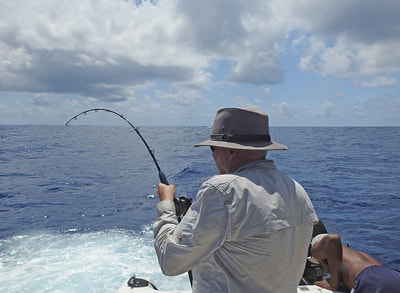 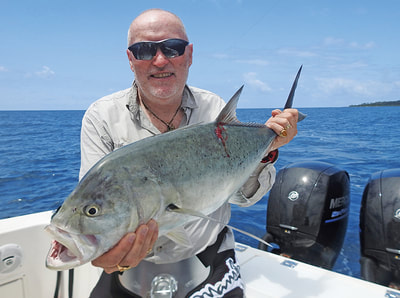 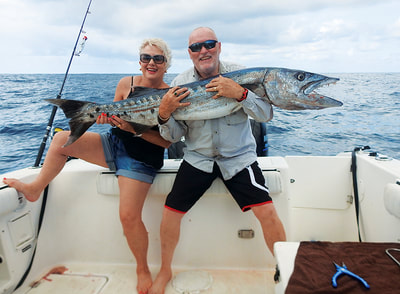 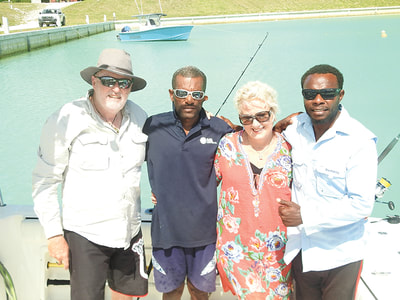 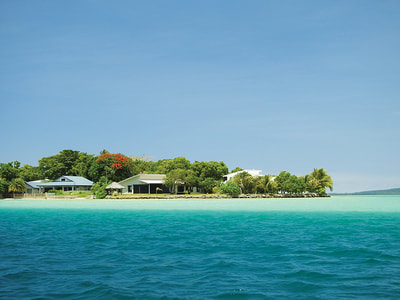 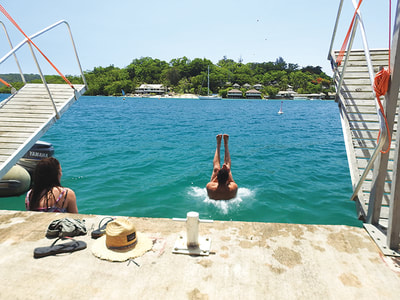 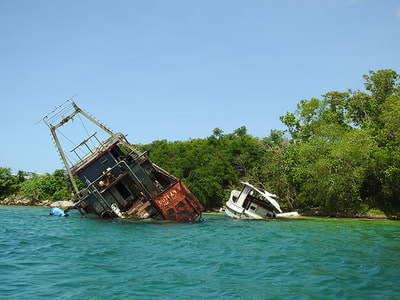 Yvonne asks if she can try some bait.  The boys reluctantly give in to her request and in moments, she pulls up a frigate fish....... “A shit fish,” Kenny exclaims, and throws it back.
I remember I have a couple of Williamson Benthos 300gram lures in my bag, and hasten to change to one of those in pink and silver. This lure should go straight down under the boat, whereas their butterfly lures tend to drift out behind us making jigging difficult.
First drop to about 40m, I complete just two jigs and suddenly I’m on. It’s a huge powerful run. “Tuna!” yells Kenny. The reel is screaming, beautiful smooth drag on the Accurate. Kenny backs up, all other lures are pulled in. “Will this take long, McGregor?” Yvonne wants to get bait back in the water. But I’m fully engaged. I call for my gimbal belt. This could take a while. I use a short pumping action to try and turn the fish. Eventually it slows and I start a long battle. It’s pretty tough. The last time I had a decent tuna on, I was using a 50w Shimano set up with a full gimbal and harness. This time I have only a small gimbal, no harness. All the weight is on my arms. The rod and reel are behaving beautifully, but I have been out for 7 hours and pulled in a couple of fighters already. I’m feeling the burn. I gain a bit, then the tuna takes it back. We seesaw for what seems an endless period. As with most tuna fights, this is largely vertical, and a direct contest between man and fish.
Gradually I begin to make inroads. Kenny calls it for a 60 kg-plus yellowfin. It would be great to add this to my species list. I know I’m getting close; there’s not much room on the reel now, so it’s gotta be only 20 m below us. Suddenly three large dark shapes come in to sight on the surface.  “Have you got a shark?” Kenny enquires. “Nope, my fish is down there somewhere,” I reply. Oh dear, this is not looking good. It’s urgent now. I’m pumping hard, muscles screaming. Gotta get my prize past those bronzies. Harry is leaning over the side; he reckons he can see the silver of the tuna. Then Thump. Thump. Bugger!  The reel screams in disgust. My tuna has been replaced by a bronze whaler shark. Oh, the pain! All in vain!
I pass the rod to Harry. “Here, you take this. I’m too buggered to be bothered fighting a 2 metre shark.” Harry’s happy; the bronzie, less so. He’s going to put up a fight. We need to get him in quickly and released, if we are going to have a chance at another yellowfin. There’s a debate about just cutting the line and re-rigging. But the guys are not keen on losing a lure, even though its mine. Kenny dons a pair of gloves and starts pulling in line by hand while Harry winds. Progress is still very slow, but the boys are in good humour. Kenny manhandles the shark to the surface two or three times, but as soon as it eyeballs us, there’s a huge splash and it disappears below. “Cut it cut it!” I yell. But the shark has other ideas, and is suddenly free. My uni knot attaching the lure has finally called it quits.
Kenny looked at his watch and declared, “Time up.” We’d have to head in. While I was deflated by the loss of the tuna, I can’t really complain. We had a mighty day with heaps of action. I ticked GT off my bucket list, and caught a mighty barracuda. Gotta be pleased with that.
Kenny guided us expertly into a newly created marina / canal area, and as we tied up, we were met by Mich for final photo opportunities and the ride home to our hotel. On the way Mich told us how he had originally purchased the boat to fish commercially for poulet, for the local market. It had proved difficult and unprofitable. He was then introduced to Kenny, who was looking for a change, and a mutually beneficial team was formed  ̶  one of the best charter boat operations on the island. I can certainly recommend Island Fishing Charters on the basis of my experience. For more information look up http://islandfishingchartersco.com.vu   Oh, yes, and they have very high quality gear on board, so you don’t really need to take your own tackle, which makes international travel a bit more convenient.
So, that was our Vanuatu experience. It’s a great place to go for a holiday, and an even better place to go for a fish. You should try it.

Now what’s next on the bucket list? Broadbill maybe?