Written by the founder of the original Bayfisher - Colin Bertelsen 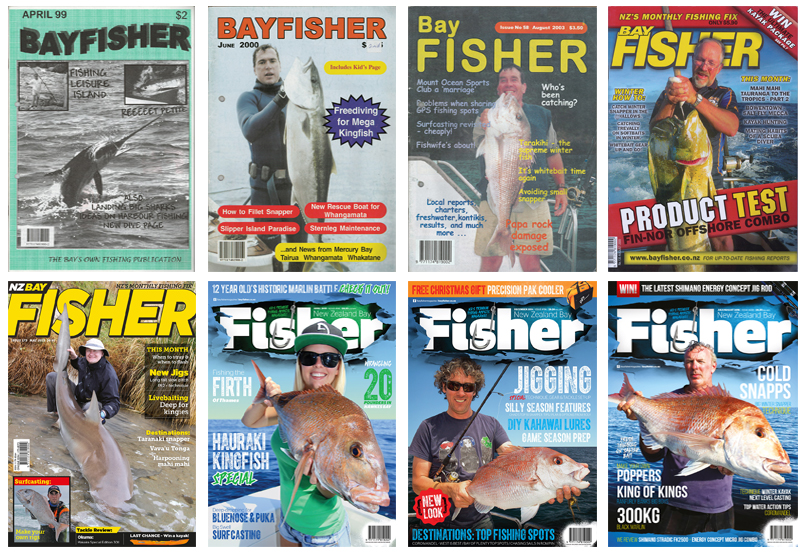 It is said that the best job to have is one which is closely related to your pastime or interests. Maybe, but in many cases there are hidden fish-hooks. Ask those charter boat fishermen who eventually chuck in their ‘dream’ job when it becomes a chore dealing with insufferably demanding clients, and the finances are hard hit by boat maintenance and compliance costs.

I took over a year to ultimately convince both my wife and myself to turn a passion for fishing into a business of writing about it. After establishing Bay Fisher in November 1998, the journey through to 2005 when the magazine was sold on, was rewarding, entertaining and very educational. I must admit that towards the end the monthly deadlines became a burden, but I never tired of having to be out on the water doing ‘research’ up to three times a week!

Having fished extensively out of Bowentown, Mt Maunganui and out west through the Kawhia Harbour, I had always felt there was a local market for the many fishing tales, and related information, that abound along these shores.
The first issue of Bay Fisher (the name has morphed into New Zealand Bay Fisher to reflect its now-national profile), was produced in Microsoft Publisher and printed at home with a Rico colour printer. We could have any colour we wanted so long as it was blue, yellow, green or red - and only one colour could be printed at a time!

Our living room floor looked like a paper recycling plant as the task of collating the pages and stapling them together became a monthly family affair. Subscriber magazines had to be inserted into plastic bags and address labels attached. The first postage stamps used had to be licked but as our saliva dried up a switch was made to the self-adhesive variety. Finally the magazines were boxed up for delivery to the Post Office and the thin chain of outlets from Waihi Beach to Whakatane that we had gradually accumulated. Lunchbars in industrial areas were our best sellers, which gave valuable clues to the profile of the majority of our readers at the time.

Following an unspectacular launch that consisted of our children and friends placing a free copy under every window wiper of the vehicles parked in all the local boat launching ramps one fine weekend, the magazine gained popularity, revenue increased from sales and advertising, and the quality of production increased as the dedicated software Adobe Pagemaker was used and Printcorp in Tauranga took over the printing.

Owning and editing a fishing magazine business came with its perks, as advertisers were always keen for you to use their products. However it was the encountered experiences that stay in one’s memory. In the course of seeking interesting articles, I’ve been fortunate enough to drive a hovercraft (I still fish over the harbour spots I found on the mudflats at low tide), spend a day on a purse seiner including a spell up in the crow’s nest observing the mass capture of 12 tonnes of skipjack off Plate Island, and a couple of days spent flying with the seiner’s spotter plane. Not that I’d climbed into bed with the seining companies, but it was an opportunity to present both sides of a contentious conflict between recreational and commercial interests.

Aeroplanes and fishing evolved as not a good mix for this writer. On one occasion the seiners were raping the environs of Cuvier Island and in the spotter plane en route my heart did a somersault as the engine suddenly coughed and faded. The pilot, one of considerable renown, calmly reached behind and without dropping a word in his conversation with me, switched the fuel supply from one very empty tank to a full one. Full power was restored. These planes have to stay in the air for very long periods of time so you must be sure to fully drain the tanks before switching!

In another incident we were circling the perimeter of Motiti Island in a light aircraft taking photos to present as land-based fishing opportunities. Obligingly the pilot kept the plane banked to port to allow for spectacular views. The four of us froze in our seats as the engine abruptly stopped - we were staring at a propeller locked in a vertical position, and the ocean approaching a mere couple of hundred metres below! The pilot frantically grappled with fuel valves, chokes and starter buttons until the machine roared back into life and our early winter ocean dip was averted. Turned out the prolonged banking of the aircraft had drained fuel away from the pickup in the starboard wing tank.

Regrettably, although probably just as well given my record in aircraft, my sole opportunity to experience helifishing for a magazine article was canned due to unforeseen circumstances. I’m still grumpy about that, though.

Achieving a balance to present to readers was always a challenge. Our early reader surveys indicated that most were into fishing for the table and that snapper and tarakihi were the main targets. Consequently they wanted fishing spots. In the western Bay of Plenty, Bay Fisher can take credit for publicising and even naming most of the many popular spots and areas that abound off our coast.  I guess it was a backhanded compliment to see some of my given names and exact GPS coordinates published in other magazines and fishing spot books!

Bay Fisher introduced many topics which were more of a historical nature than fishing-orientated. Local wrecks such as the Taupo off Bowentown, the Taranaki at Karewa Island, and the SS Manaia at Slipper Island all featured in early editions. And our most famous, the recent Rena on the magical fishing reef of Astrolabe, made a right mess of a similar situation that almost claimed the French corvette Astrolabe some 178 years before.

The fishing components of the most compelling historical story I researched and presented included a well-known gamefisher seeing, during the Second World War, a German submarine at Mayor Island; and three guys fishing just inside the Tauranga Harbour entrance having a mini submarine surface close to them not long after.
I actually interviewed the last surviving fisherman and give full credence to his tale. The rest of this story is wrapped up in conjecture, hearsay, and the alleged discovery of a suspicious seabed wreck near the north-western reefs off Motiti Island. The tale involves killings on a beach at Motiti, a curse that was placed on the foreign invaders, and the subsequent untimely early deaths of local divers who sought more information from the seabed.  Anywhere in New Zealand we may be enjoying a day on the water pulling in fish, while being completely unaware of many tragic events that unfolded nearby in years gone by. Do those who cross the sometimes treacherous Manukau Bar ever pause to reflect on the 189 sailors who drowned there in 1863 when the Orpheous went down?

The early magazine can proudly lay claim to publicising the interest that many women take in fishing. The ‘blokey’ thing about fishing was both scuttled and used as diversion when our first female writer joined the magazine. Paula Trubshaw, alias Wife of Riley, has gone on to being a contributing writer to some ten magazines and has now also written several books. At one time we had four female contributors to the magazine – and sales increased!
The early Bay Fisher was not all plain sailing, though. Our traditional April Fools articles in the April edition provided plenty of mirth, but gradually fell victim to the PC nonsense that has enveloped our society. A cock-and-bull story about using sparrows as livebaits caused cancelled subscriptions, angry phone calls, and a threatening letter from the NZ Forest and Bird Society! And our April Fools tale of a great white shark swimming up the Kaituna River on the nights of the full moon, lunging from the water to take grazing animals from the river bank, caused quite a stir and showed just how gullible some people are. Not so amused was the Hawkes Bay fuel delivery owner who had the misfortune to have a phone number that digitally matched the 0800 phone number given at the end of the article for those many readers who wished to give advice on how to catch the river monster!

From its humble beginnings New Zealand Bay Fisher didn’t take long to assume the mantle of New Zealand’s second longest-running fishing magazine. Many have come and gone, and with the coming of the digital age and the online opportunities of the world wide web, it is indeed pleasing to see that the magazine has withstood the test of time and has continued to adapt to changing times. From 32 pages of blurry newsprint, the old Bayfisher lives on as a glossy hundred-page coffee table production, challenging TV shows, books, DVDs and other media rivals for the opportunity to introduce, entertain and inform ongoing generations of fisherfolk.
​
Long may it continue!
subscribe here!