Words & Photos: Scott Cushman
​
I do a lot of small boat and rock fishing around the Hibiscus Coast, and I get the kayak out too sometimes. There are lots of little areas of reef and habitat that can be explored and that hold fish for the stealthy angler. There are plenty of reefs with kina beds, and also waterways spilling onto the coast ... they all offer snapper food. There are diverse ecosystems that support all kinds of flora and fauna, which in turn make these sites attractive for our larger eating fish to visit.  Mangroves, shellfish beds, sand flats and the usual reef areas all play host to kingfish, trevally, snapper and kahawai at various times.
You can usually find some area of quiet and calm water, sheltered from even quite strong winds from the N-S-W quarters. Strong easterly winds close out a lot of the coast but there are still little corners of safe fishable real estate around the Whangaparaoa Peninsula and Mahurangi Harbour.
Big snapper are caught occasionally, but you’ll often come home with a modest bag of snapper in the 30-40cm range, although perseverance will see the bigger 3-5kg fish make a showing as well. Snooping into the corners and nondescript rock and reef systems will usually turn these fish up, although the traffic in shallow water can often turn things off.
A lot of boat fishermen blast out to the 40m mark or head north to Kawau Island; but when there are strong westerlies, there are other areas to target in close, especially north of Hatfields Beach. 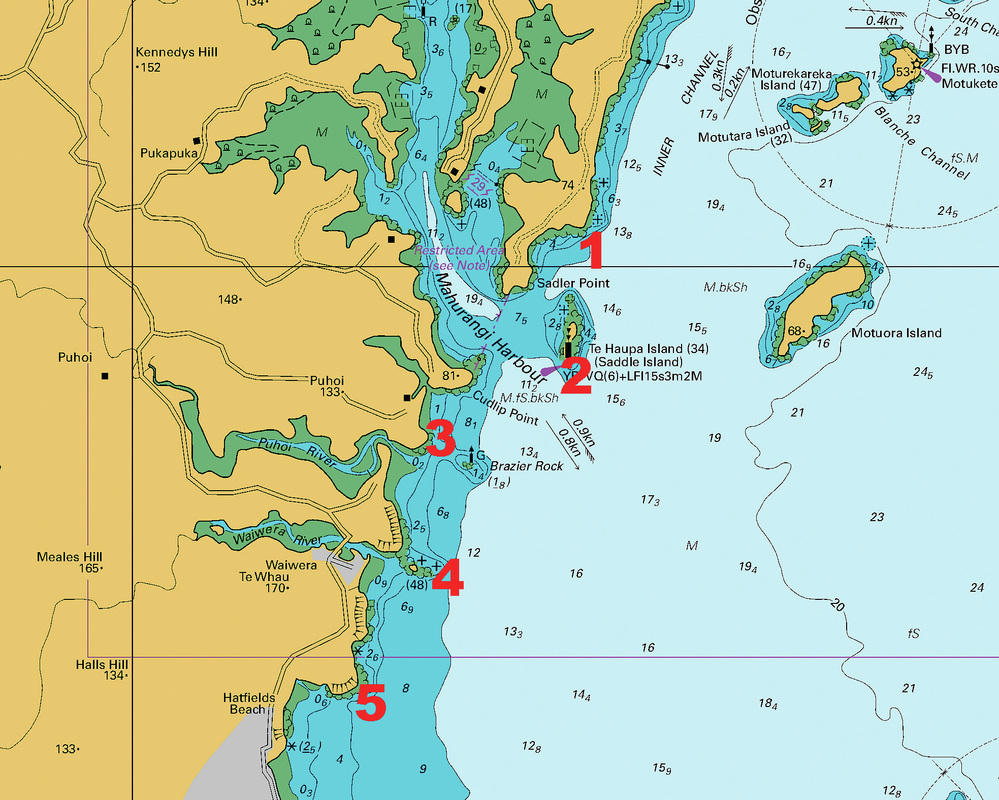 Spot 1.
The point 1.5km north of the Mahurangi Harbour entrance has a foul bottom dropping into deeper water and has a bit of current sweeping past. Bait and berley can produce results and you’ll catch a few different species when you’ve been sitting there quietly for a while. Craypots in the area also indicate our crawly friends are around, if you want to try for a dive closer in. Unweighted baits are good here, with the berley pot a few metres off the bottom to help broadcast the scent over a wider area.

Spot 2.
The south end of Saddle Island. You can anchor up here parallel to the marker; the best time is usually with a gentle westerly and outgoing tide. Use bait and berley to attract some of the local jack mackerel, which make great cut baits for the snapper that also live hereabouts. Dawn and dusk are good times but daylight can produce eating-sized snapper as well.
This is also a good place to set a live mackerel on the bottom for a roving John dory; I like to use a short 50cm sliding leader with a 3oz sinker sitting on the bottom. You can let the fish run with the bait while you decide whether you need to clear the deck because a kingfish has taken the bait or haul up the fish because a slower-moving John dory has struck.
And because kingfish pass through here, a live piper on the surface is another a good strategy.
You can also launch out of Sullivans Bay in a kayak and land base this spot two hours either side of high tide. Big bronze whalers, snapper, kahawai and the usual baitfish all turn up.

Spot 3.
The point on the north side of the Wenderholm Estuary has a good patch of reef running into deeper water (not on the inside of the estuary but 300m north of the mouth). I’ve drifted through here with softbaits and done well on 2kg snapper in the cooler months; if there hasn’t been too much traffic or activity, you can find them mooching around the weed beds. A gentle northerly – or even a south/south-westerly wind – is good for being pushed over the better areas. Bright-coloured softies seem to turn the fish on and although there isn’t an extensive reef system to harbour a lot of them it’s worth drifting and searching to see what’s resident, especially if nearby Braziers Reef is quiet.
I’ve also done some bait fishing through here; there’s enough kelp to support some good John dory, so set a live bait on the bottom or work softbaits with lots of action at slow speed to entice our big-mouthed friends.

Spot 4.
Waiwera Island, also known as the Sugar Loaf. There is current coming up the coast here, and also from the river that flows out either side of the island. Kingfish and snapper can be encountered off the point, and this is also a spot that can produce trevally on a semi-regular basis, while kingfish occasionally come in close to the shore and hunt for piper and mullet. Over the years I’ve also seen them patrolling the beach in front of the campground, and on the north side I’ve seen them smashing mullet hard up against the rocks in less than 50cm of water.
The north side has lots of heavy foul, and snapper mooch along here on the outgoing tide at the change of light.
I have done a few kayak trips to the low-lying ledge on the end of the island. It’s easy to land there, although you have to vacate at about half way through an incoming tide. But evening fishing can be good, casting pilchards in a berley trail.
Catching piper in the daylight and then using them whole, slowly retrieved over the kelp, is too easy sometimes. The jack mackerel will turn up in force in the berley trail after dark, and these also make awesome bait. Fishing long into a warm summer’s night will see you come home with a good haul – but if you night fish here, do it with a friend. The tip can be accessed at dead low water but I wouldn’t recommend it ... tragically, people have drowned trying to get back across the estuary as the tide was coming in.
I’ve drifted across the front with softbaits and jigs and find the fish respond to both, although micro jigs seem to be slightly more popular. A gentle westerly is good for drifting here with a drogue/chute over the side.

Spot 5.
Hatfields Beach and point. The launch here is reasonably good because it is sheltered from westerly and northerly winds. I sometimes prefer to launch off the beach instead and there’s plenty of room for that if the ramp is in use. At the top of high tide you can’t get onto the beach though, so watch your timing.
The point at the north end of Hatfields has a long finger of rock extending out into the water, which you can hike to near the bottom of the tide. I prefer to kayak out to it though, and fish the incoming until the last remnant of rock disappears under water. I stand there with my kayak tied to my waist, trying to catch the last snapper in the berley trail before sitting into my yak and paddling home.
Anchoring off the point can also be productive when the moon phase is right. A few days before the full moon or the phase in between full and half moon can work here, and occasionally it will surprise you with a full bag of fat 1 - 3kg fish. Don’t expect this every time though, as lots of summer traffic can put the fish off the bite and sometimes they just aren’t around at all.
I’ve also encountered small kingfish here, as well as kahawai; and I once spotted a blue koheru in the berley trail, although it wasn’t that interested in my bait. 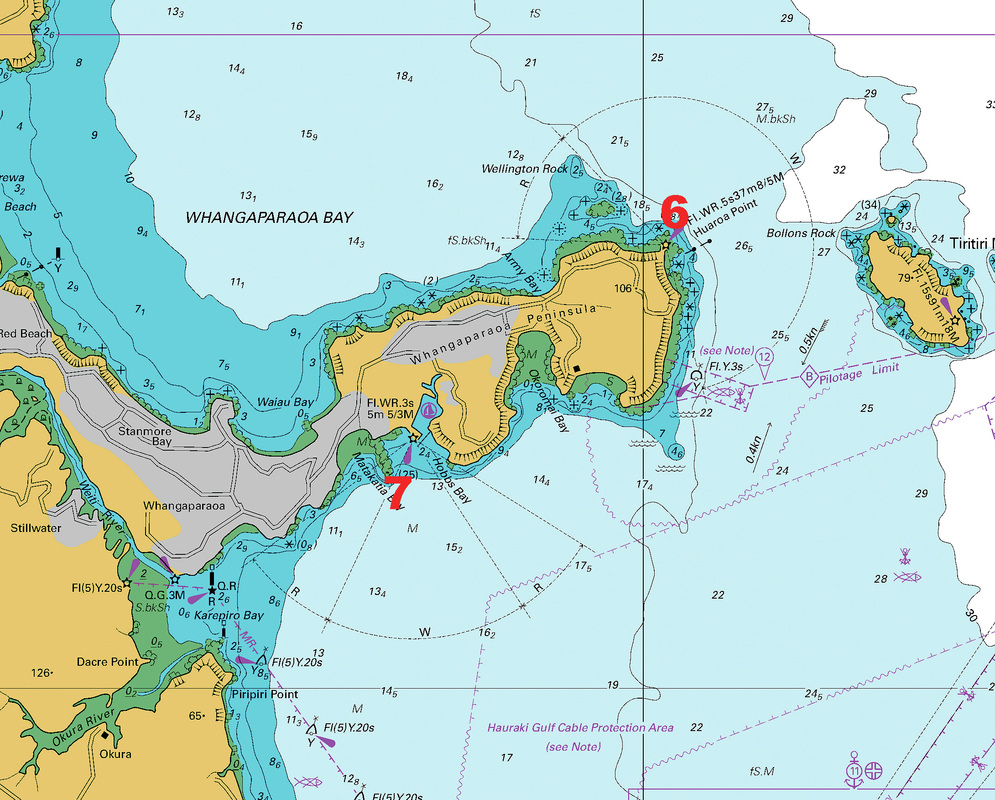 Spot 6.
I land-base this section of reef, accessed by kayak from Army Bay. If the swell is down it can be fished safely over half to low tide. It’s also easy to operate from inside the row of rocks on the northernmost part of the reef system; there are a few that sit high there, so paddle into the lagoon-like area inside them and fish on the outside, casting into the current that comes from the direction of Army Bay.
Night fishing can be good here, but like any night fishing on sections that aren’t connected to land (or rock fishing in general) you need to fish with a friend. The bottom is foul so get ready for some rough-and-tumble scraps; the larger snapper will win if you aren’t prepared.

Spot 7.
Kotanui Island. This is the island you can clearly see on your right as you exit Gulf Harbour. This is another spot I like to paddle out to in the kayak – but of course you can fish from a small boat or kayak as well. The best spot is the south eastern corner where it drops off amidst kelp beds. Again, this is a low tide spot, but you can fish with the water lapping around your knees and the kayak tied to your waist for access to your bait and gear. A lot of rock spots are like this around the coast – but only when there isn’t any swell. It’s very shallow though, so night time is the best time to have a go here.