The sheer simplicity and uber-effectiveness of using jigs!
Words and photos by Espresso
Graphics supplied by Catch Fishing 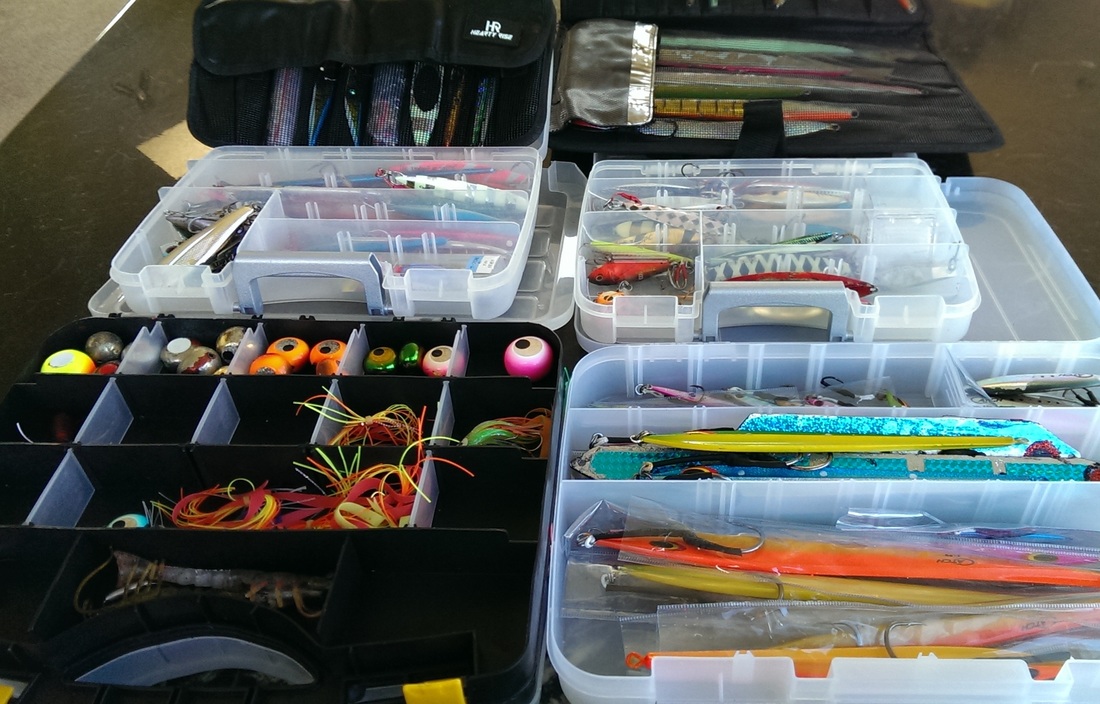 Taking the FEAR out of jigging
.
What’s the best way to start jigging successfully? Simple – head out fishing and start catching fish as you normally do, and where you normally do...and then, when you are catching fish – it’s time for a jig!
Why do it this way?  Because the most common mistake is to try something new when you aren’t catching fish, out of sheer desperation. Do you think some new bit of bling is going to be the fabled fish magnet and 20lb snapper and 100lb kingfish will suddenly appear now you have shiny a new tiny toy?  I don’t think so, Tim! Start catching fish first, so you get the idea straight away – the different feeling of fish hitting jigs, and the usually ultra-aggressive nature of their initial runs and fight.
The entire idea of a jig is that is looks alive; we’re not talking dead bait fishing with stealth and “Ssssshh-h-h; don’t scare the fish” here – no, action is everything - it must be moving, at least most of the time, so it looks alive, at least partially. Rod Holder is often the perfect teacher, as many people tend to jerk and move the jig way too much. Most good jigs almost have a life of their own when allowed to strut their stuff unhindered; they’re designed to flick, flutter and turn the fish on with flashes of light i.e. dislodged scales and the swimming sideview of baitfish as they panic and dart about. Eyes, colours and vibration, erratic action in the water, death throes, and/or visual stimulation – they all excite a fish to wonder – what’s that? Best I take a bite! It certainly looks like it should be eaten! The kicking, jerking and fluttering of a dead or injured baitfish (jig) is just too much to resist, even when the fish is not actually hungry.
Jigs enhance the natural scenario by using holographics that reflect light just like scales. Check it out the next time you’re drift fishing and encounter a workup for instance: you can’t miss the rainbow of colours reflecting off the scales in the water – and the same thing happens with the flashy glitz on jigs. Add the wiggling, wafting flutter from various shapes when a jig falls down the water column and we now have something of irresistible excitement to a fish … and it’s strike time! 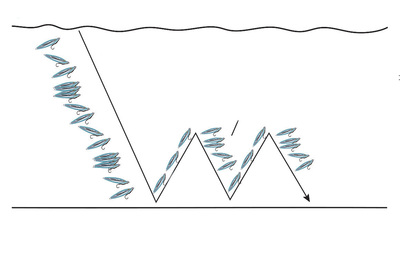 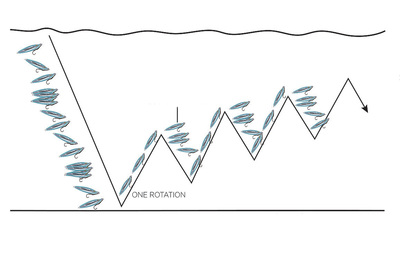 SHORT FALL ACTION
Why use jigs at all; I’m catching fish now?
Jigs are clean, fast, efficient, can entice a strike even when fish aren’t hungry, they leave no bait smell on hands, clothes and boat - and you’ll get an even happier reception (oh yes!) upon returning home if you’re not smelling like a week-old pilchard. Plus, there’s no more checking line to see if your bait or soft bait has been bitten off, and a small number of jigs can be very cost-effective for fish catching (unless barracuda are around!). And the direct feel with jigs ‘n’ braid is like nothing else (although braid is not a must-have); you are literally luring, teasing a fish into striking. It’s a very active hands-on and rewarding way to catch fish.

Varieties, weights, actions.
This is the fun part when you’re maximizing your fish-catching on jigs. Say you’re out drifting in 40m and you need 100gm of weight to get down to those depths. There’s a 10 knot wind, and drift speed is slow to average. Give your jig a little cast ahead - no distance records required; just a nudge in the direction you’re drifting - so that by the time it reaches the sea floor, the line is straight down below you. Vertical motion of jigs is the most effective method most of the time; don’t have too much of an angle in front or behind the boat and you’ll increase the attention - from snapper, especially.
Try using as big a jig as you can when the fish are biting well – the theory is that bigger jigs catch bigger fish - except when they’re in the mood for smaller or micro jigs (which is why you need several jigs in your weaponry bag).
Big fish feed on sight; there’s no wine tasting ‘sip-and-spit’ stuff here. Say that Big Green Machine (kingfish) senses something in the water. He eyeballs it and decides to chase it down and bite it, sucking the hook into his mouth as he attacks the jig. He may well try several attempts, so when you feel a hit – this is the perfect excuse to strike. Most people love striking fish: hooking up, setting the hook, it’s all about the hookup! Another heavy dose of adrenaline and the wondrous addiction of fishing is reinforced once again.  Strike that fish! No hookup? Drop the jig into freefall instantly for a second or three – as the lure recovers from its hit-and-miss and falters back down, then the fish smashes the lure again.
The wider and smaller the jig, generally the longer the hang time; the longer it flutters and mucks around on its descent. This action is perfect for snapper, dory, kahawai and other ‘foragers’. Colours can also play a part, but action (shape) is primary. So I would suggest having a small range of weights of lures to start with … e.g. a 20, a 40, a 60, 100gm and 150/200gm jig will suffice in most conditions, in water from 5m to 50m. And yes - using a 20gm in 50m is quite normal – but try using a spinning reel on a calm day.
Cast well forward because it takes longer to flutter down, and then hang on. When that lure flutters near the bottom, snapper look up, dory start eyeballing, gurnard swim up to it, kingfish get amped and hit it…the list - and the fun - go on and on. Try different weights and see what’s working. Once you’re catching fish with jigs, vary the colours and shapes to maximize your hookups.
Landbased jigs are taking off in popularity as well. Micros (less than 20 grams) are great for maximising flutter and hangtime in shallower waters. But vary your retrieval, from steady winding to halting, start-stop action.

Where to use jigs?
Pretty much everywhere. Fish feed on other smaller fish – so whether you’re in the shallows with lightweight - say 20gm - jigs or you’ve gone right up to a 1kg jig for deeper and bigger fish (eating bigger baitfish), jigs can be used effectively in every depth of water, for most fish.

How do you use a jig?
Do you know roughly how to softbait? Then jig!
Use braided line (although that isn’t 100% necessary) tied to a leader, exactly as you would for softbaiting. Jigs are often the next progression for many softbaiters, using the same gear and virtually the same style of drop-and-retrieve; and the lightweight approach to tackle is usually the same too, as it increases bites, size of fish caught and the thrill of the hookup and ensuing battle.
Tie the mono leader onto the solid ring – giving you direct contact with the hook, rather than the jig or the split ring.
I prefer one hook only on a jig. Two hooks tend to maul the fish’s face, making for the release of a blind or gill-damaged fish. Alternatively, the second hook may sink into your fingers – one hook for the fish, one for you! As for trebles – well, they’re banned on my boat and many others because of their tendency to foul-hook fish and just about everything else – fingers, clothes – as well.
The hook should dangle around a third to half the length of the jig – because that’s where a fish strikes – primarily in the head/stomach area.
OK - so a fish sees a jig and decides to eat it. As it opens its mouth it generally sucks as it bites at the jig – so it’s the hook rather than the jig that enters the mouth (unless it’s a micro); so when you feel a change on the drop, whether it’s a speeding-up or a halting, faltering pause – strike!  If you reach the bottom try a single wind up: just one turn of the reel handle – or alternatively raise the rod tip smoothly, not too fast – and pause momentarily at the top of your ‘swing’ for say 1 or 2 seconds, then let the jig freefall to just above the sea floor, and repeat. Using your reel to lift and drop the jig, or combining a rod lift and reel wind, will raise and drop the lure to make it come alive down there.
If in doubt put the rod in the rod holder and watch … but slacken your drag a little as the fish may head straight down and stress your rod tip to the point of breaking if the line is not free to run. Rod Holder has a very smooth and enticing action on a jig in the water – try it: drop the jig down just 2 metres, put it in the holder, and see how it performs – it should look very good.
The jig lifts and falls; gently does it.  Vary it, too - fish will hang around this thing for ages eyeing it up, so you do need to PAUSE so a fish eyeing it up will seize the moment and hit it. No hook up? Drop the jig immediately!  Why? Because injured fish fall.
​
Advanced
So! Once you get hooked on jigs, and many who try and are successful do become addicted and dedicated jiggers from then on, you can go all out like every other aspect of fishing and go nuts on jigs with ultra bling paint jobs, (the artwork on some designs is just amazing), and specialized jigging rods – generally shorter, twitchier carbon rods, with acid wrap guides that spiral around the rod itself, eliminating twist.  Fluoro and mono are both good as a leader, and the suppleness of mono which allows jigs to move even more freely shouldn’t be overlooked, particularly for small or micro jigs. There’s really no limit to the tackle, specialization and subsequent thrills of jigging. You might end up regarding it just another option in your arsenal of fish-catching methods or you might go all out ... it’s ALL good and it’s all your choice.
Overhead or spinning reel? Again it’s your choice, but in general most prefer a spin reel for shallower waters and for casting further away with lighter jigs, and an overhead for dropping down in deeper water, with heavier jigs.
​