Smoked fish made better!
Words and photos by Joe Dennehy 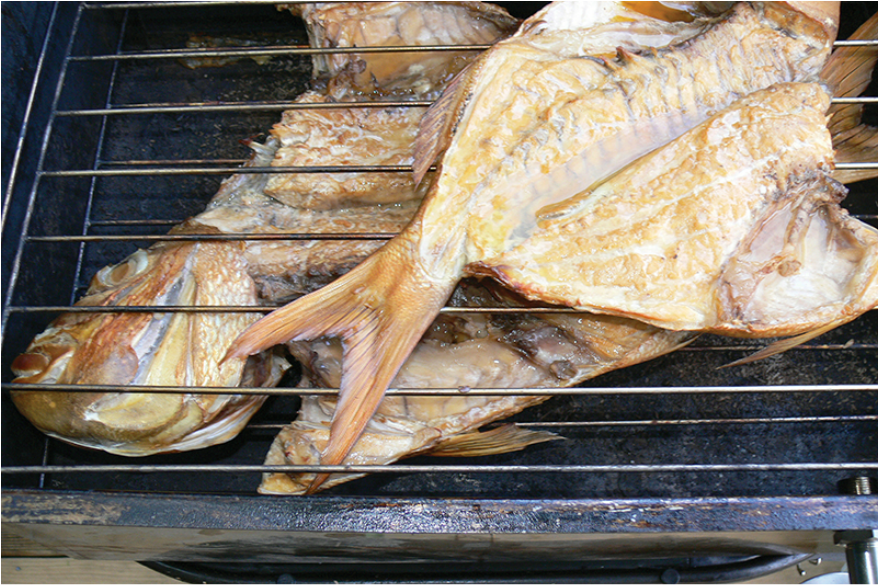 I want to have a rave about smoking fish...
​
I care passionately about it, and it frustrates me that so many people don’t really know how to do it - because if they did, they’d enjoy it much more.  Whenever I meet people who just sprinkle some salt and sugar over the fish and then within a few hours smoke it, or – even worse - when I read about how to do it like that in as fine a magazine as this one, I realise just how many people simply don’t understand the process of curing. But then when I meet a commercial operator who also does this, it makes my teeth itch, and I’m overcome with a desire to explain the process. So let me do that - and then you can make up your own mind about how best you like smoked fish! Whew! 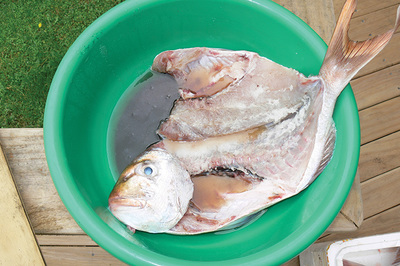 Fish after curing, this was a 45cm snapper after 24 hours 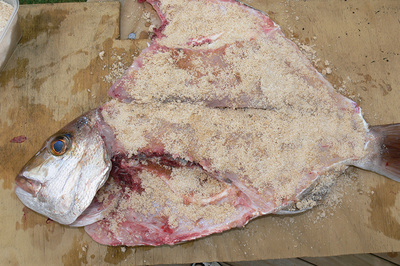 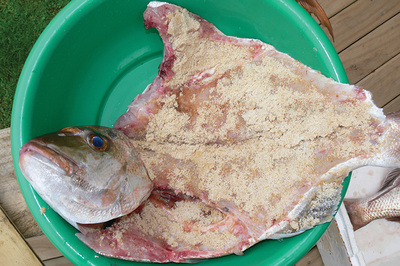 Salted and ready for the fridge 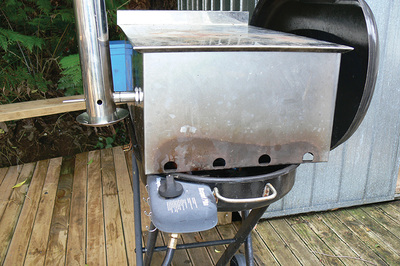 Smoker with cold smoke generator on the side 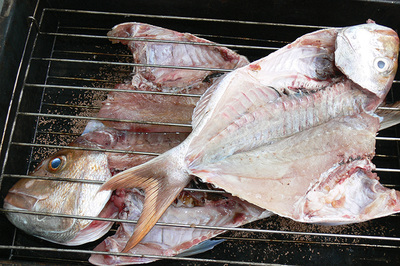 Fish on racks in smoker ready to go 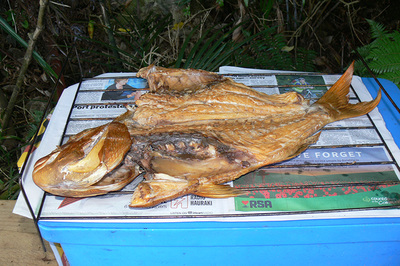 Finished snapper cooling down
A little history
Preserving perishable food has been part of human history for hundreds of thousands of years, since our hunter-gatherer past. The methods have been as varied as freezing, if you lived in a cold area, to sun-drying in warm areas. In the earliest times when one of our ancestors killed an animal too large for the family’s consumption, it would presumably be shared around, as there was no means of making the meat last - which is why traditionally men were hunters in a group and women were gatherers in a group. Then came the practice of drying meat and fish, which probably got partially smoked at the same time, while it was drying beside or over a fire.
These old methods are still popular today - curing, drying, and smoking/hot or cold. None of them are really necessary as we can bottle or can it, or freeze it, and even simple refrigeration can keep meat and fish fresh for more than a week if handled correctly. The Italians have their famous Parma ham which is cured with salt, and then dried over time - sometimes hung from the ceiling in a room with an open fire, which partially smokes the ham, and sometimes in cellars which are dry and cool all year round. Compare this with the Christmas ham we have in our country: cured with salt, smoked and cooked but which lasts only weeks – and then only if handled properly ... and yet properly-cured (uncooked) parma ham or proscuitto lasts years. Salami is the same, but is even more clever as it’s a byproduct of the butchery process: small bits of meat ground up, cured with salt, sometimes smoked, but always dried - the same as parma ham.
It’s about the flavour
The sole reason we do this today is because we like the taste. We love ham, salami, bacon, corned beef, jerky, biltong, smoked salmon, mussels, and other fish. We can all smoke fish if we want to. Kahawai are easy to catch whether you have a boat or not; they can be caught from the shore - and mackerel can be caught from most wharves and jetties.

The only fish worth buying and smoking in my view is salmon, as it can be bought for $25 to $30 per kilo - while cold-smoked salmon sells for $100 a kilo, and hot smoked is not much cheaper. So - with knowhow and a bit of work you can have a luxury food treat at a fairly affordable price.
We all know the ingredients for smoking fish: fish obviously, either filleted, or whole fish split with guts and gills removed; salt, brown sugar, and of course a means of generating smoke from sawdust/wood, and containing it so the fish is coated in it.

How to do it
OK – so now here’s the technique. Once the fish has been prepared, we have to cure it. We need salt and brown sugar, and nothing else at this stage other than a large container for the fish - either for brining or, more usually, so that we can apply the salt and sugar mix and contain the juice which comes off it, while keeping it cold. I use a very large bowl which I can put in my fridge, although with really big snapper/kahawai or chopped up kingfish, I’ll a large old roasting dish with high sides, placed above salt ice in a big chilly bin.
But it’s the method of curing and drying that most of us don’t understand. I mix half plain salt, with half brown sugar in a 2 litre bowl. Then I apply it thickly to the flesh side of the fish/fillets to be smoked, place them in the container and put it in a cold place (either fridge or chilly bin as above).  I coat the fish thickly – to the extent that half a dozen large (750 gram) kahawai fillets will use a kilo of this salt/brown sugar mix. I leave the fillets coated in that mixture for at least 24 to 48 hours.
This process is called curing and is the most important step in smoking fish properly; it can make a huge difference to the flavour, not to mention the increased keeping quality. Quick-smoked fish that hasn’t been cured will last just a couple of days in the fridge, which may not be a problem if you don’t have much of it; but properly-cured hot-smoked fish will last ten days, and the properly-cured cold-smoked variety can last months, especially if it’s vac packed. It doesn’t need freezing; if you have to freeze your vac-packed cold smoked fish it hasn’t been cured properly.
Many of you may never have done this curing business before I know, but I urge you to try it. You can vary the mix of salt and sugar from 2/3 salt to 1/3 sugar, through 50/50 which I use, right through to 2/3 brown sugar to 1/3 salt.
But try the 50/50 method; you can wash the salt off before smoking.
After the curing is complete, tip the (many cups) of fluid out of the container, and either pat dry the fish with paper towels, (for a salty end product) or, if this method is new to you, wash the fish with fresh water, then pat it dry, and smoke it for twenty to thirty minutes in a hot smoker, or for as many hours as you can be bothered in a cold smoker. Note: if you plan to cold-smoke the fish for more than 4 hours, wash it in salt water before smoking. If you don’t have access to sea water, mix 1 cup of salt with 2 litres of fresh water in a bucket.  This prevents the fish starting to go off over the time that it’s smoking (osmosis causes cell disruption by fresh water, causing the fish to rot).
Once the fish has been washed this way for cold smoking it’s important to leave it to dry in a warm fly-proof place. You want the surface dry but tacky to the touch, so that the smoke sticks to it.

Take your time!
Whenever fish or meat is preserved by smoking, curing and/or drying, the purpose is to remove as much fluid as we can, and this is why curing the fish before smoking is so important, and it’s also probably why many of us can’t be bothered – because it takes time. Most people don’t leave the fish on the salt long enough, and yet removing the fluid is key to a good result. I’ve seen many people hot-smoke their catch within a few hours.
They’ve loved it: “It’s so moist and juicy,” they say - but to me it tastes greasy and inferior to properly-cured smoked fish.
Some cultures concentrate so much on the curing that they don’t even bother to smoke it at all!  Gravlax, a Scandinavian dish, is an example: the salmon is just cured for two days, and the outside covered in pepper and spices.
My family and I like it salty, so we don’t wash the fish before smoking; we just wipe off any excess with a paper towel. I realise that this smoked fish is too salty for many people though, so unless you like very salty food like olives and anchovies wash the fish and pat it dry before smoking.

More about the flavour
I’ve seen all manner of flavours applied to fish before it’s smoked: sweet chilli sauce, maple syrup, and all sorts of herbs, and this aspect is well worth experimenting with. Personally the only spice I have found that makes the fish taste even better than plain salt and brown sugar was a light sprinkling of smoked paprika applied just before smoking - but each to their own (I’m referring here to smoked paprika, not the regular Greggs packet variety).
In summary, the key to good smoked fish lies in the length of the curing, provided you keep the flesh cold. Cure your fish for at least 24 hours before you smoke it - you’ll notice the difference!
Well, now you know how it was done before the days of refrigeration. You can choose how you like to eat it, but I honestly doubt that you’ll ever go back to hurriedly-cured fish.