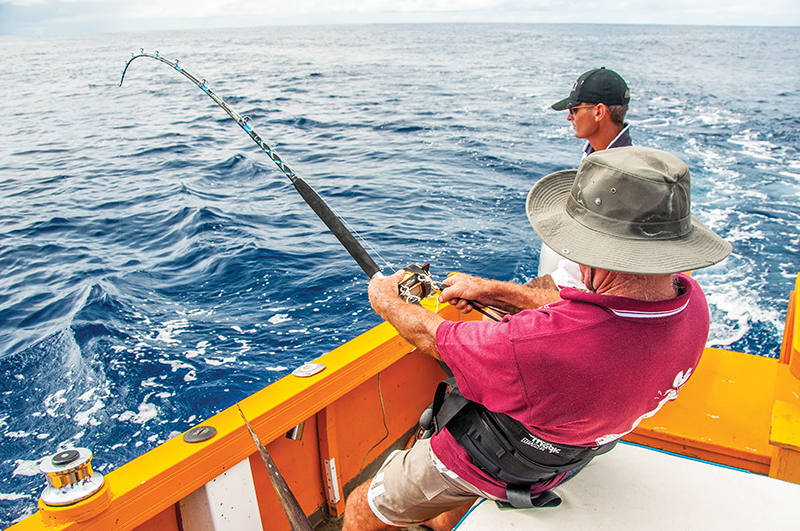 Top Shotting refers to the practice of using a combination of braid and mono when spooling up a reel for game fishing. It’s a very popular method with North American tuna fishermen although other game fishermen also use it, with equal effectiveness; and there are applications for inshore fishermen, although so far it hasn’t become a widespread practice, despite its benefits.

The benefits of top shotting are numerous. Mono degrades in sunlight while braided line by comparison doesn’t effectively degrade at all. The section of line that is wound most often through the guides is usually the first 100m or so, which means the mono section can be easily and economically replaced.
Another benefit is the amount of braid that can be spooled onto a game fishing reel: you can fit two or three times more line compared to mono, which means several benefits for the angler. A game fisherman who would normally run 50W reels could save money by buying 30W reels instead. A trailer boat fisherman wanting to try game fishing for the first time doesn’t need to spend as much money to have a go.
It’s also an opportunity to upscale the line, for example using the standard 50W reels to spool up with 80lb line in case the angler decides to head to Waihau Bay and tangle with a large blue marlin. On an overseas trip I spooled a Daiwa SLD30 reel with 60lb braid with a 60lb mono section (40 or 50lb would have been easier) and we successfully landed a 156kg blue marlin.
There are however factors to take into consideration when down-scaling your reel or up-scaling your line. Firstly, 30W refers to a reel that traditionally is engineered to fish 30lb line. If you’re going to fish 50lb line on a 30-size reel, you need to make sure that the reel can withstand the additional pressure a fight with 50lb line will place upon it. Fortunately, with the popularity of braid these days, many manufacturers have re-engineered their reels in the frame, gearing and drag departments to handle the increased stress placed upon them.
The usual method of top shotting is to spool the reel to 70 or 80% capacity, depending on how much mono you want to add. 100m is a good length for two reasons.
First, you want to have only the mono – and not the braid section – in the water when trolling, as if you’re using lures that have any kind of spin in their movement the line will quickly cause twist in the braid section. (Bibbed lures for tuna are OK though, as these don’t spin at all in their swimming actions.) Mono will twist as well, but not nearly as badly as braid.
The second reason is that braid doesn’t stretch, and a decent section of mono is required to put some stretch back into the equation, as violent head shakes will increase the chances of a broken line or pulled hook.
Another consideration here is the fact that full mono line produces extra weight behind the fish it then has to pull around. A belly in 600m of line produces a lot of weight and drag, whereas braid won’t create the same pressure on the fish; this will have to come from the reel’s drag instead. Where a reel would have its drag set for 30% of the line strength, there may be times a higher drag setting is warranted because the fish will not be fighting against the weight of the line.

There are two types of braid when it comes to top shotting: hollow and solid core. Top shotting has traditionally used hollow core braid from brands like Jerry Brown and Power Pro Hollow Ace. A line class of braid 30-40% stronger than the top shot section is used. (You can top shot equal strengths, but this is rather difficult and very fiddly.) For example, 80lb braid is used with a 50lb top shot mono section because the diameter of the braid needs to be big enough to fit the mono, but not so big that the mono will pull out. This works because the hollow braid tightens around the mono and the resulting grip is incredibly strong. This connection is stronger than a knot tied in the mono or the braid and it is almost seamless meaning there is no wear on the connection as it goes through the guides.
The tricky part is serving the mono into the braided line; I’ve done this with just a large regular (carpet) needle, although the dedicated splicing needles make it a lot easier.
Solid core braid can also be used for top shotting. The advantage is that solid core braid is, on average, half the price of hollow core line. The disadvantage is that the connection is not as seamless as hollow core, although it can be constructed to still run through the guides fairly well.

This is the setup I use for targeting marlin off the rocks. Last summer I landed several mako sharks – to 130kg – off the rocks while applying 12kg of drag, and it worked flawlessly. It’s interesting to note, incidentally, that the braid is about 8 years old and shows no sign of weakness. I tie a bimini twist in the 80lb solid core braid mainline, serve a 100m section of 80lb mono into a 1m section of 130lb braid, then form a loop in the other end of the 130lb braid and connect it with a cat’s paw knot to the mainline. When you splice the loop in the short hollow section you need a latch needle to pull the line back into itself to form the loop.

One of the disadvantages of using this system is that you won’t be eligible for a record in New Zealand if you catch a monster; however if you fish for fun, and records aren’t important to you, this is still a great way of rigging game fishing sets.
Tools required
Splicing needle
Hollow braid
Mono section for top shot
Approximately 1m section of 10lb braid, for whipping the finished connection
Super glue
Scissors
Fine grit sandpaper