Andy Brockie, who is skipper aboard Nimble II for Bay Fishing Charters operating out of Marsden Cove has suggested an easy to get to location for those who have smaller vessels and who want to put a few pannie snapper in the bin over summer.
​Andy’s latest spot is at the Whangarei Harbour entrance between the number 5 and number 7 channel marker buoys. As Andy is quick to point out, there is no need to go far over the summer to find great table fish but that all changes over the cooler months. The spot at the entrance to the harbour on the eastern edge of the channel is in about 18 metres of water between the #7 buoy off Home Point and the #5 buoy out towards Busby Head. Neither the time of day nor the tide are particularly critical to success and the trick is to drift with the tide, which can run at perhaps 2-2.5 knots using 6 ounce sinkers and flasher / ledger rigs. Small Jack mackerel baits will secure good pannie sized snapper of 45-50 centimetres with some smaller fish in the mix, perhaps at 35 centimetres. If you end up in the eddy that sometimes forms adjacent to the #7 buoy you will find the fish are smaller and you will need to move into water with some flow again to find better fish. Softbaits aren’t that successful along the channel edge for some reason so stick to bait. For kayaks, dinghies and runabouts the most convenient access point is the ramp at Urquhart’s Bay.
http://www.bayfishingcharters.nz/

Great Exhibition Bay
Northland
GPS  34-30.889 S   173-01.670 E
Rob Parker of Houhora Fishing Charters is well known for finding his clients trophy snapper and was willing to share some locations and information so that the rest of us can get out and have a look for something big ourselves.
​Rob suggested that there is an area in the northern portion of Great Exhibition Bay close to the entrance to Parengarenga Harbour where big snapper can be found in spring and into the summer as well. Ohao Point is a finger which protrudes into the sea and fishing off the point or to the south will have you drifting over low foul and rubble, little reefs rising just a metre or two above the seabed. Begin your drift in a minimum of ten metres depth and aim to drift offshore to 20 or 30 metres deep. About a kilometre offshore should have you over the mini reefs and rubble where the snapper reside. Rob suggests using two softbait set ups and big 7-10 inch Z-man soft plastics, cast one and keep it moving and allow the other to drag as the boat drifts. Jigs will also prove effective in this area, especially sliders but micro jigs and inchikus will also be effective as they are worked. You might like to drag a softbait at the same time as you work a jig. Avoid sitting on the anchor and berleying, you will end up with a shark problem. Take care near the harbour entrance and remain in at least 10 metres of water or deeper.
Houhora Fishing Charters, www.houhorafishingcharters.com 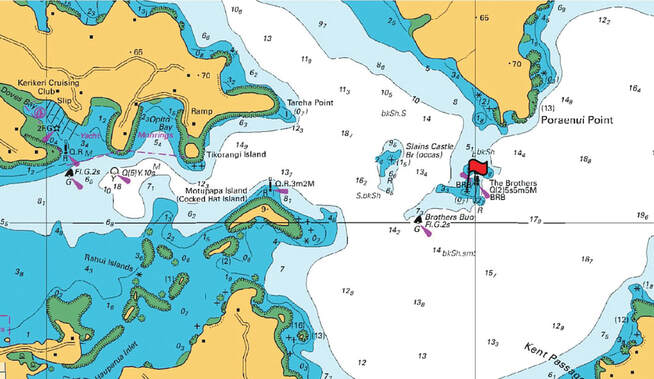 The Brothers
Northland
GPS  35-11.890 S   174-03.862 E
Darren Knapping, skipper aboard Days Out operating in the Bay of Islands shares a hot spot with us that is a consistently productive snapper location.
​Darren is a wealth of knowledge and our conversation about the Bay of Islands snapper fishery was rich with observations about the seasonal movements of snapper both in the bay and down the coast. The Brothers is a reef comprised of three main rocks situated at the entrance to the Te Puna and Kerikeri inlets. The reef rises from the sea bed at around 14 metres to within just a few metres of the surface. Darren suggest that you fish the area on an incoming tide. He also strongly recommends using live baits to target snapper and says that Jack mackerel are best and are almost always present a little distance away on the inside of Battleship Rock at the eastern end of Moturoa Island. Either drifting or anchoring will work but drifting the edges of the reef determined by breeze and tide should have you on the money. In fact any structure in less than 20 metres depth in the area will hold snapper. The area fishes well in late winter and early spring when ‘pre-school’ males predominate, ‘scout’ fish turn up in September and October then seem to move out again before the main body of school fish turn up when the water warms in late October and November.
Days Out Fishing Charters. www.fishingdaysout.co.nz or call Darren on 021 0860 4019

Ocean Beach
Northland
GPS  39-49.414 S   174-34.929 E
The Nimble II and skipper Andy Brockie of Bay Fishing Charters operate out of Marsden Cove. The spot Andy shares with us is easy to get to and sheltered from any south-west or westerly winds. Off Ocean Beach there are 3 or 4 rocks which rise from the sea floor which is around 34 metres below the surface. It is primarily a snapper spot but a variety of other species are present, you can expect to catch kahawai, tarakihi, John dory, trevally, mao mao and sweep as well. The area regularly yields kingfish on cut baits so a livey or a jig may well get you hooked up to a kingi. You can safely anchor there or drift over the rocks and it fishes well through both incoming and outgoing tides, with little current to contend with. Andy suggests 6 oz sinkers and a ledger rig, fresh butterflied baits or pilchards are effective or you might prefer to fish softbaits or slow jigs. Although Andy suggests the spot is a good winter snapper location, it fishes well in the warmer months too and some of the surface activity in summer is impressive. You might want to prospect in the general area for other isolated patches of foul which are also productive.
Bay Fishing Charters.  Call Andy on 027 685 4969 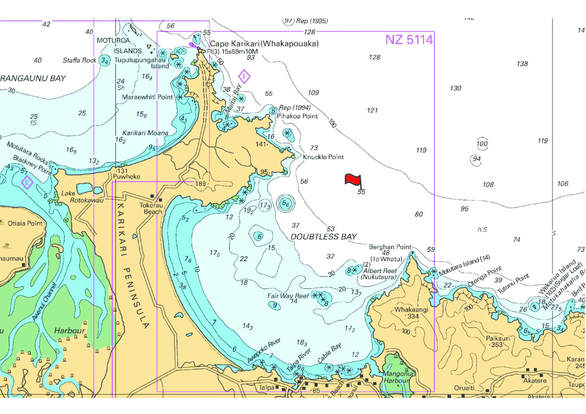 Oasis Rock
East Coast Northland
GPS 34-52.39S   173-31.17E
​Lance Goodhew, skipper aboard Enchanter of Enchanter Fishing Charters describes his spot as “an isolated rock in the middle of nowhere, a bit like an oasis in the desert.” It lies in the outer Doubtless Bay on Northland’s east coast, a spot Lance passes often. The rock rises only about 3 or 4 metres from the seabed at 55 metres, and is best fished from summer into the autumn, and on an incoming tide. It’s an excellent spot for kingfish up to 20kg and is most productive early in the morning. Bait fish, usually mackerel, will sit a few metres above the rock. Lance says, “Both mechanical jigging and dropping livebaits are effective and hits can be expected at around 50m. Use 200 to 400g jigs in baitfish colours: blue, silver and green. If live bait is not apparent on the fish finder or the kingfish aren’t playing we’ll change to ledger rigs and baited flashers, perhaps 3/0; it’s also a good spot to catch terakihi.” On the other hand if it’s snapper you’re after this rock won’t interest you; you’ll have to move inshore to some of the shallower foul and reefs, Albert or Fair Way, or along the coast. 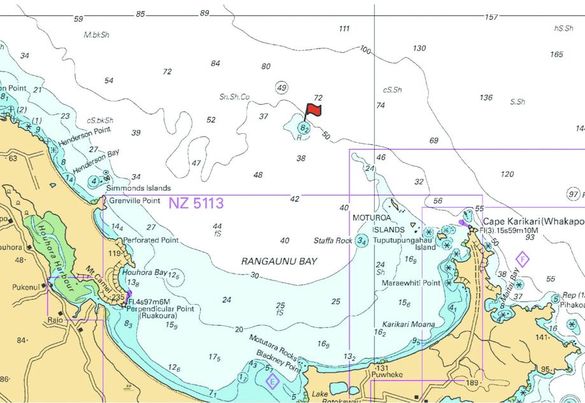 The Shallow Patch
Northland
GPS 34-43.55S   173-17.13E
Rob Parker of Houhora Fishing Charters shares one of his favourite spots, The Shallow Patch. It is very productive to fish year round and is an area of foul with six pins rising toward the surface from an extensive reef system with a drop off into much deeper water to the north. Rob says, “For some reason this area is consistently productive in almost any season, at any time and tide and for a variety of species. Bites are almost always instant and aggressive. The deeper water to the north fished an hour or so before a high tide with 300 gm pink or purple jigs is very effective when targeting kingfish and at this time of the tide bigger fish seem to be most aggressive. Live baits will also work well. Try fishing the extensive area of foul between the pins while drifting with lightly weighted straylined baits with a two hook rig. If you are a bit more traditional you could also anchor up and pump a burley trail and strayline for large snapper that way but we find drifting is most effective. Off the foul and onto the shallower cleaner bottom to the south and west will provide ideal opportunities for slow jigs around 30gm - 40gm; in October, November and December large schooling snapper, up to 10kg frequent both the foul and the surrounding areas. Resident snapper will be present on the reef year round. Off to the deeper side terakihi can be located and trevally are often present in schools if they haven’t been cleaned out by commercial fishers.” 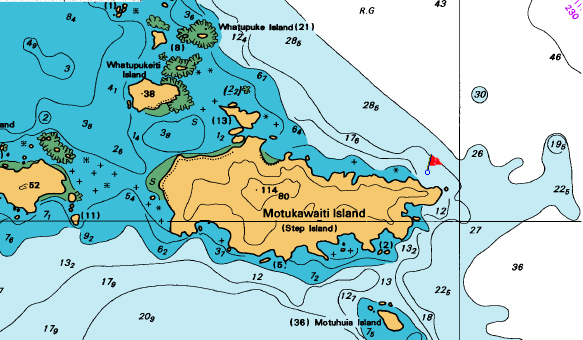 STEP ISLAND
Northland
​I reckon this should be called kingfish alley as it produces good numbers of decent kingies. Slow trolling livebaits is the go here or static livebaits close to the rocks.  As kingfish do, they can be on or off but when they are on this is as good a place as any. 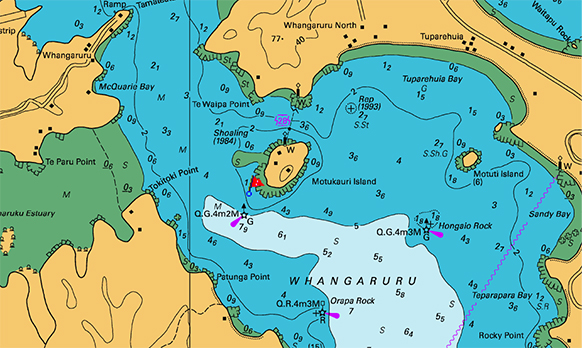 MOTUKAURI ISLAND
Northland - Whangaruru Harbour
GPS 35°21.312'S, 174°20.247'E
Motukauri Island is is a great spot to strayline using plenty of berley. The locals recommend fishing the last two hours of the outgoing tide and if this coincides with change of light even better. Smallish cut baits are best as the main catch is pannies oi collect pippis at low tide for baits as these work well. Use little or no weight on your line. 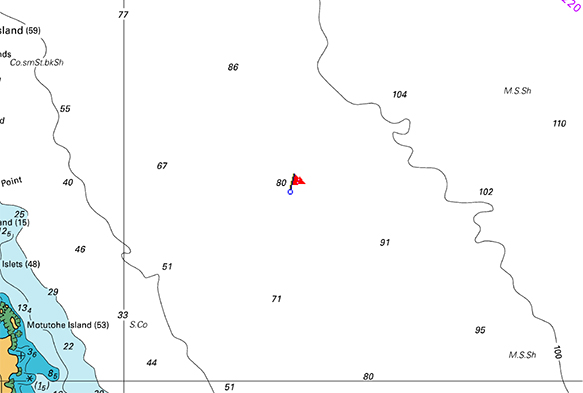 OUT WIDE
Northland
GPS 35-27.51 S 174-32.73 E.
​Another good spot for
tarakihi during winter . Out wide can harbour good numbers of snapper but are usually the smaller versions. The current can be quite strong sometimes so a decent weight and braid lines are worth considering.