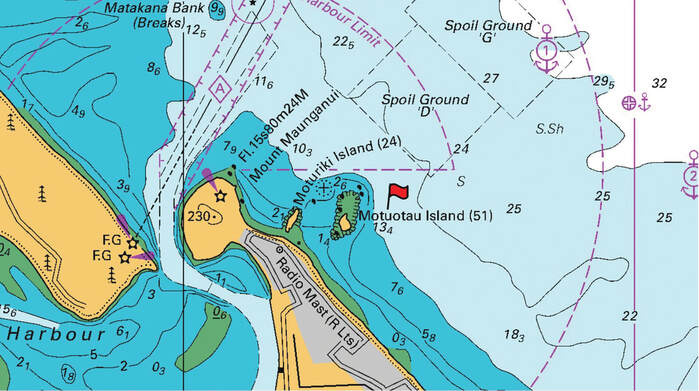 Motuotau Island
Mount Maunganui
GPS  34-30.889 S   173-01.670 E
Lucas Allen is the skipper aboard King Tide for King Tide Salt Fly operating out of Tauranga. What Lucas has to suggest as a spot is really a reminder of the old adage to ‘fish your feet first’. Just outside of the Tauranga Harbour entrance and around Mount Manganui, is the small island of Motuotau (or Rabbit Island as it is also known), lying not far off the beach. To the east of the island the seabed slopes away from the shallows to around 20 metres and there are clusters of rock and low foul. Some of the structure is slightly larger and will hold congregations of snapper. The way to fish the area is either to locate a piece of structure and using your fishfinder, set up a drift over the spot using slow jigs, softbaits or even a ledger rig with cut baits. The area is also well suited to anchoring and berleying back toward a piece of structure holding fish. It’s nice and handy and lends itself to an evening strayline for a few nice pannie snapper, although you might have to work your way through smaller fish till you hook some of the bigger fish among them. Dropping a Jack mackerel livebait is likely to yield a John dory or a kingfish as well. The Motuotau spot fishes best at change of light and from October to November and then again from January to April.
King Tide Salt Fly, www.kingtidesaltfly.com 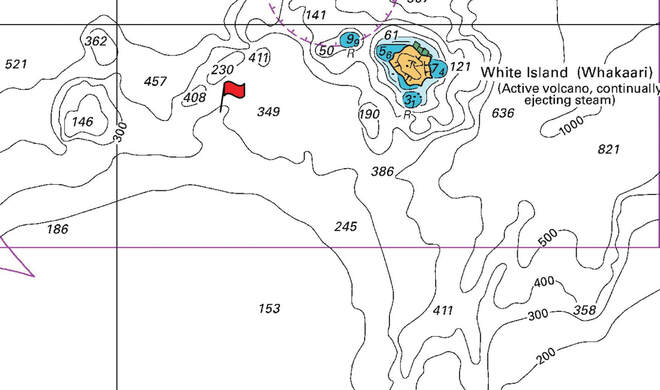 ​Blue Mountain
Bay of Plenty
GPS  37-32.618 S   177-03.806 E
Mick Brown, skipper aboard Club Talk operating out of Whakatane has a spot and some information for those wanting to deep drop for gemfish, hapuka and bluenose. Blue Mountain is a seabed structure sometimes called ‘The Rabbit’ because that’s what it looks like on the chart plotter, the head and shoulders of a rabbit looking to the west. It is located a little under 6 nm west southwest of White Island. The seamount peaks where the rabbit’s eye would be but there are lost nets and other unpleasant snags there so the idea is to fish the ridge where the rabbit’s ear is. You will be fishing to 290 metres and Mick says that there isn’t too much current but it is influenced by the phase of the moon. The spot is best fished over the two hours before both the high and low tide. A 32 oz sinker and a deep drop ledger rig with 14/0 circle hooks is the go to rig. Squid or barracouta are the baits that have proven to be most effective. Although winter is the time of year most fishers target hapuka and bluenose they are present at Blue Mountain year round, although spawning congregations do consist of bigger fish, particularly the bluenose.
Club Talk Charters. www.clubtalkcharters.co.nz 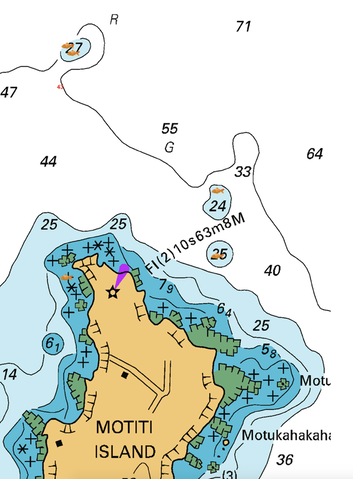 Motiti Island
14nm due west of the Tauranga entrance. This is the go to place for snapper and diving for crayfish. There are many rocks around the island that have claimed or damaged many a boat over the years so make sure you carry a chart. Shallow-water straylining with big baits is the best technique for big snapper. While soft baiting we have also caught trevally, kingfish, blue cod and kahawai.

Halfway Reef
GPS 37-34.536 S 176-24.756 E.
A reef off Motiti comes up to 27m and has produced many a good snapper over the years. Softbait or straylining for snapper produce the best results. If kingies are about put a livebait under a balloon while you fish for snapper. 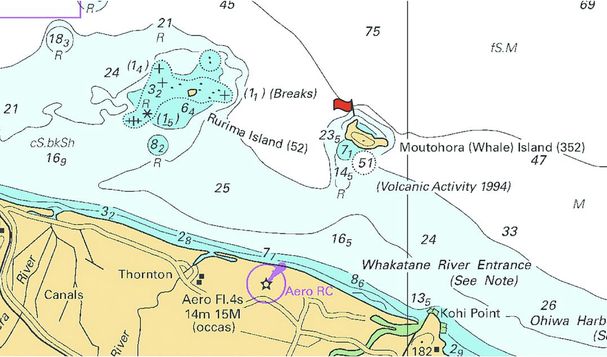 NW Whale Island
Eastern Bay of Plenty
GPS 37-50.75S   176-58.13E
​An oldie but a goodie if fished right, says Phil van Dusschoten having operated Diveworks Charters out of Whakatane for 20 years. This spot is a 500m long underwater spur reef running directly out in a N.W. direction until it sinks below a sandy bottom at a depth of around 50 meters. As the current changes direction, this spur is best fished on the upstream side by anchoring your boat well away and then drifting back on the anchor to fish at or near the spot the reef emerges from the sea floor. Just like hang gliders fish sit here waiting for oncoming food as each new tide brings it to them. The length of this reef has been a consistent producer of snapper, terakihi, and trevally on baits while kingfish respond well to jigging. In late summer with the blue water surrounding the island, schools of blue mao mao and even skipjack tuna abound. I am not a great fan of using burley here unless you have it right on the bottom as this spot can at times be thick with small makos. Anchoring on top of the reef, as many do, not only produces mainly small unwanted reef fish and red cod but nearly always leads to lost tackle and could add to the reef’s vast collection of anchors and chains. I suggest that at least 100 meters of anchor rope is required to anchor here successfully and we use 10 oz. sinkers to ensure our baits are in the right spot. 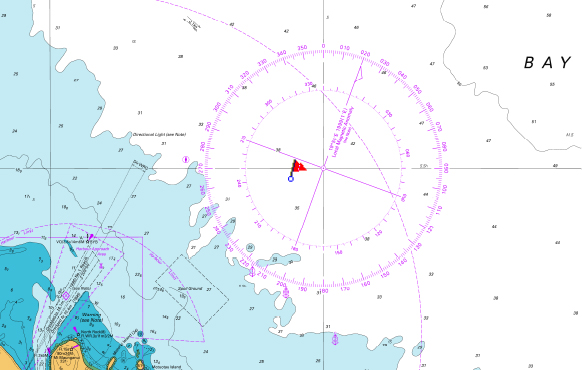 THE QUARRY
Bay of Plenty
GPS 37-35.180 S 176-14.404 E.
​Not far from the Tauranga harbour entrance in the middle of the compass rose is this stretch of foul. Depthwise it is about 39 meters and turns up a veriety of fish including trevally , tarakihi, snapper, blue cod and if you use softplastics or a small livie deployed just off the bottom some nice John Dory. A ledger rig is the go-to here for most species.

BOWENTOWN BAR & MATAKANA BANK
Bay of Plenty
This Bowentown bar and Matakana bank is very productive particularly in November and February to March.  However you need to have your wits about you and definitely eRr on the side of caution  as this area breaks even with very small swells. Snapper fishing can be superb if you strike it right, ie: early morning, late evening and night, although it also fishes during the day. Use your sounder to find a suitable location, which will probably be quite shallow – around three to six metres. Kingfish come on at the bar from about November onwards through summer. Trolling with Rapalas is a popular way to catch them Berley, set floaters and the usual skipjack or pilchard baits will work just fine and drifting with softbaits is a winner here also. 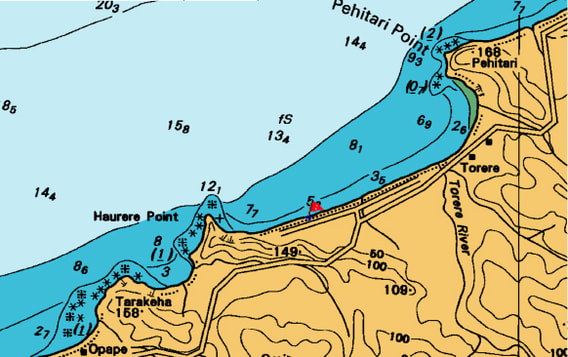 TORERE (SURFCASTING)
Eastern BOP
A steep, shelving shingle beach with a marked  drop-off along the edge of the beach, which creates dumping waves.
We have recommended this beach for the summer holidays as you don’t have to be an expert long distance caster to catch fish here as the  water along the beach is fairly deep.  A lot of fish are hooked just past the lip on the beach. Over summer, catches of kahawai and snapper are common. Best bait for this is half a pilchard tied on with cotton. 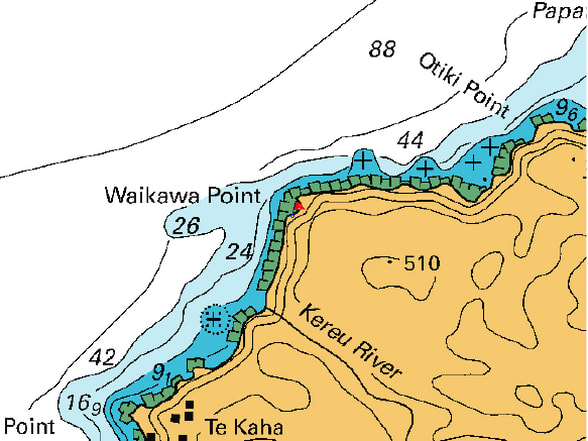 WAIKAWA STREAM
East Coast
Waikawa Stream Is located just east of Te Kaha, look out for the signpost where it crosses the main road.  There is a good parking area here with room for a picnic and in calm weather a small tinnie can be launched from the beach. As launching is weather dependant it doesn’t get hammered and there is some superb stray-lining country here for snapper.  Also a primo spot for livebaiting big kings. 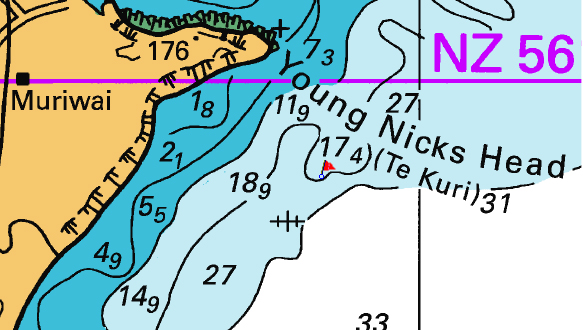 YOUNG NICKS
East Coast
GPS 38-46.60 S 177-58.90 E.
Close to Young Nicks head and only 25m deep is a great spot to try your luck on  snapper, kahawai and  blue cod. I have been told the odd puka has been caught here but can't verify that. Young Nicks is sheltered from the Nor Wester by Young Nicks head so is a good spot for smaller boats however crossing the bay can be rough. 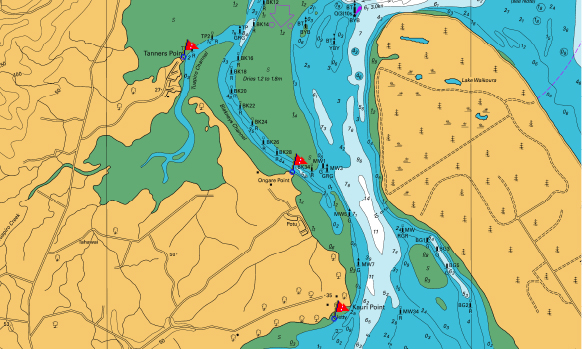 TANNER'S POINT Bay of Plenty​
Sign-posted off State Highway 2 and has a  good concrete ramp for launching. There are some good channels just out from the ramp that can produce good snapper and trevally stray-line  fishing over the summer months at any tide. Not a lot of weight is needed as the current is not super strong in these sheltered waters.
ONGARE POINT
To reach the Ongare point launching area turn left at the sign about midway down Kauri Point Road. A small craft launching area  puts you onto some prime snapper stray-lining grounds and is also a good spot for a bit of flounder fishing.
KAURI POINT WHARF
A jetty that has seemingly been made for anglers and the long structure attracts and holds fish. It is a great place to take the children as jack mackerel, herrings as well as juvenile kahawai are abundant.  These baitfish also attract predators such as kingfish of varying sizes. Casting out from the end into deeper water will produce snapper, especially at night. 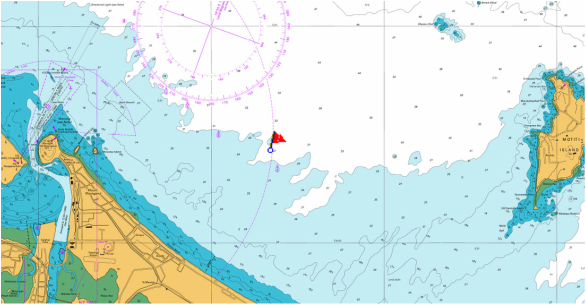 SIX MILE REEF
Bay of Plenty
GPS 37-37.853 S 176-16.733 E
A well known and popular spot out from the Tauranga harbour entrance and is a nearby destinatiOn in reach of most boats. Early morning or night will produce the best results. Six mile is a low lying papa rock reef system that hold mainly snapper  and the best method is berleying up with your berley on your anchor line about 4-5 meters above the seafloor and a weighted strayline out the back. Fresh kahawhai or pillies are both good baits. 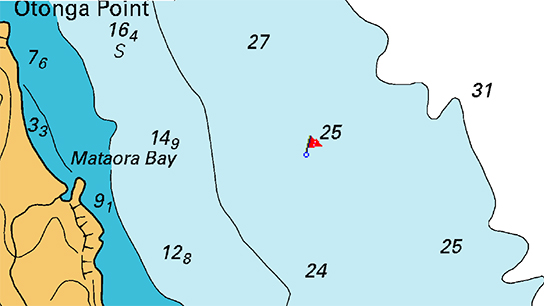 HIKURANGI ROCK
Bay of Plenty
GPS 37-18.298 S 175-57.106 E.
It’s a great time to be tarakihi fising in July /August so we are featuring two tarakihi spots this month. Hikurangi is actually two rocks which rise about one to three metres off the bottom, on a good day Hikurangi can produce some great
tarakihi fishing. Snapper and Gurnard are a by-catch here as well.