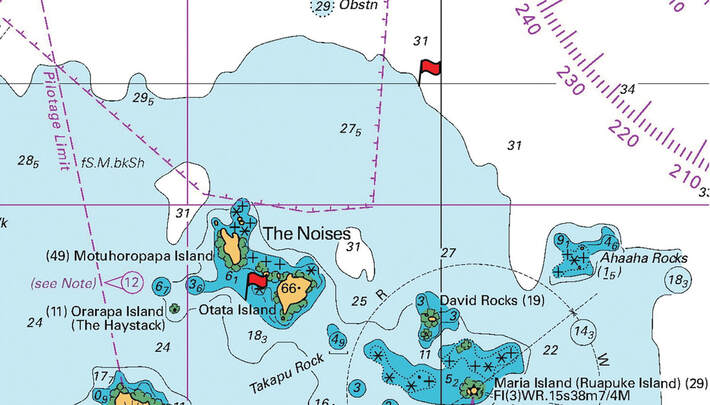 The Noises
Hauraki Gulf
GPS  36-41.786 S   174-58.004 E
Jack Lucas who is a charter skipper with Double Rum Fishing Charters and Hauraki Express has some late summer spots to try for a snapper. In fact his spot is actually a ‘two-for’ and he’s added some info about where to find live baits just for good measure.
The Noises are well known to regular Hauraki Gulf fishers as a reliable location to prospect for great late summer snapper. The first of Jack’s spots is on the southern side of the Noises as the seabed rises from 18 metres up onto an area of low foul and shallows. It’s a good location to anchor and strayline with a good berley trail pumping. It fishes best in a westerly or sou’west breeze and on an outgoing tide. Good current will help and change of light is always most productive. Pilchards, mackerel and anchovies are proven cut baits fished with a minimum of weight. On the northern side of the Noises out on the 30 metre contour is a really good spot to drift and fish with slow jigs of various styles: Kabura, Inchiku and micro jigs. Also to the north of the Noises, is a corner in the ‘Cable Zone’, along the southern edge of the zone is a good spot to find live baits as is the area to the south of the Tiri Channel along the northern edge of the ‘Cable Zone’. Baits caught there will make excellent cut baits for snapper or deployed as livies will tempt a kingi or a John dory at the Noises. Jack was keen to remind fishers that both anchoring and fishing in the ‘Cable Zone’ is prohibited.
Double Rum Fishing Charters, www.doublerum.co.nz
Hauraki Express, www.haurakiexpress.co.nz 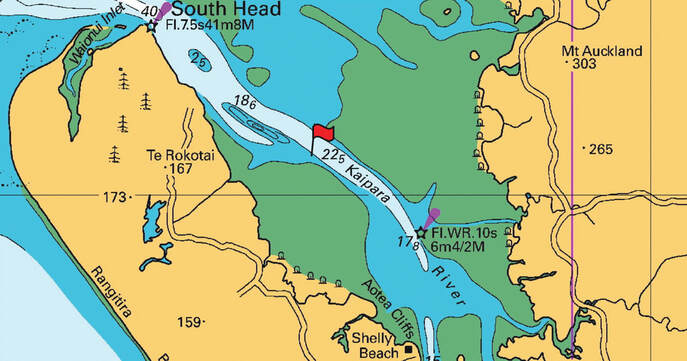 Omokoiti Flats
Kaipara Harbour
GPS  36-29.012 S   174-19.295 E
Wayne Kostanich, skipper aboard Ali-Kat operating on the Kaipara Harbour, shares a tried and true winter / spring gurnard spot with us. It is on the southeastern edge of the Kaipara River Channel adjacent to the Omokoiti Flats and not far from the marker pole.
​The water is deep in the middle of the channel but rises from around 13 metres up to 3 or 4 metres in the location Wayne has described. Although the spot will fish well on both tides, the incoming is favoured and tide should dictate the time to fish rather than the time of day, change of light will make little difference so no need to mess around in the dark. Wayne suggests anchoring up and berleying on the bottom, if your berley has some mussels in it you might well catch snapper as well. Use ledger rigs and 4/0 or 5/0 flashers, pink works well. Baits should be kept modest in size, bonito or fresh mullet are go-to flavours, avoid squid when gurnard are the target species. Depending on the tide running and the depth, a 5-10 oz. sinker may be required. If the bite is slow on the tide that you are fishing, Wayne suggests moving to the opposite channel edge, that has often made a world of difference.
Ali-Kat Charters. www.ali-katcharters.co.nz or phone Wayne on 021 258 5431

THREE MILE REEF
Bream Bay
GPS 35-53.864 S   174-32.907 E
The Nimble II and skipper Andy Brockie of Bay Fishing Charters operate out of Marsden Cove. Andy shares with us an easy-to-get-to spot that will provide great eating fish for the bin and the odd trophy snapper as well.
Three Mile Reef is part of an extensive area of foul, rubble and rocky reefs, interspersed with clear patches rising from 35m up to 25m, off the Whangarei Harbour entrance in Bream Bay. Andy says the area is a genuine year-round spot yielding good pannie-sized snapper with a bit more intense action in spring. It’s at that time of year that the consistent gurnard fishery is at its best; and in winter especially (but throughout the year) the spot will deliver tarakihi as well. Andy anchors and uses berley extensively. Ledger rigs and 6oz sinkers will prove effective but so too will drift fishing, using softbaits and jigs. If you’re going to anchor and fish bait, make sure you also take rigs with smaller hooks – 2/0, to target the gurnard and tarakihi – if you want some variety in your bin. 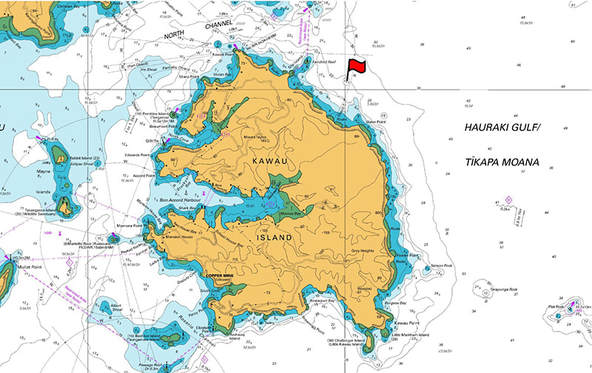 EASTERN KAWAU REEFS
Northern Hauraki Gulf
GPS 36-23.895 S 174-52.025 E​
George Bourke of Hauraki Express, operating in the Northern Hauraki Gulf, suggests a series of spots he
recommends as well worth a look on the eastern coast of Kawau Island.
We originally talked about Tarapunga Rock and Nelson Rock but, as George pointed out, there are times when some better known spots become a bit crowded, or subject to a lot of fishing pressure. George says that actually, every reef system on the east coast of Kawau Island is productive and will provide really good fishing. All the reefs from Little Kawau Island to the south around to Maori Rock to the north will fish well for a variety of target species: snapper of course, and blue cod, but it’s kingfish George wanted to tell me about. Each of the reefs disturbs the strong tidal currents that run past them and are great spots for livebaiting. They’re best fished over the slack tide and a livebait rig using 6 – 8oz ball sinkers, a swivel and 1.5m trace will do the trick. Any local baitfish will be effective as livebait. You can expect to connect with plenty of medium sized kingi, with John dory as a side catch. Kaburas will also catch kingfish in these areas. Snapper are responsive to a range of jigs when fished off the reef edges, and kelp lines and softbaits are always productive. In late summer through to autumn, bite times seem to be longer and more persistent. And as a bonus in the summer skipjack schools frequent the same coastline, so go prepared to cast something small and shiny as well! 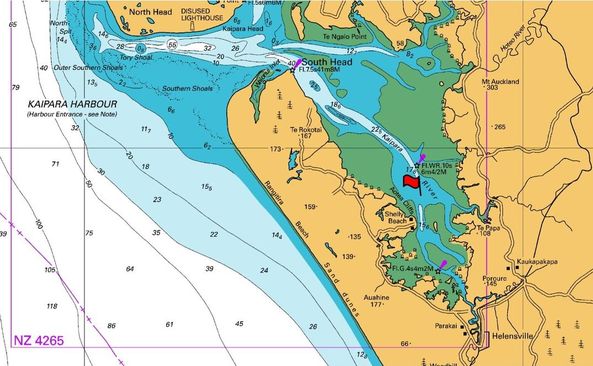 Makarau Channel
Kaipara Harbour
GPS 36-32.705S   174-23.013E
​Kaipara Cat Fishing Charters operator and skipper, Tony Walles has shared a convenient and productive spot with us for those unfamiliar with the Kaipara.
​ It will take just 15 minutes to travel by boat from Shelly Beach and will put you in about 12metres of water at the point where the Makarau River channel meets the main southern channel within the harbour. Tony says the spot is very definitely an outgoing tide spot and is unproductive with an incoming tide. It is primarily a snapper location and Tony suggests anchoring at the point of the confluence of the channels and resisting the urge to use berley; there are too many sharks in the Kaipara. Use a single hook strayline with a 1 to 1.5 m trace is recommended along with a 16 -18oz sinker to cope with strong tidal currents. A long skinny (25mm wide) strip of mullet or squid passed over the hook once at one end seems to work best. You can expect to good pannie sized snapper throughout the warmer months. The spot will also yield kingfish, so livebaits might be something worthwhile catching and taking along. In the cooler months the Makarau Channel is also a great gurnard spot. 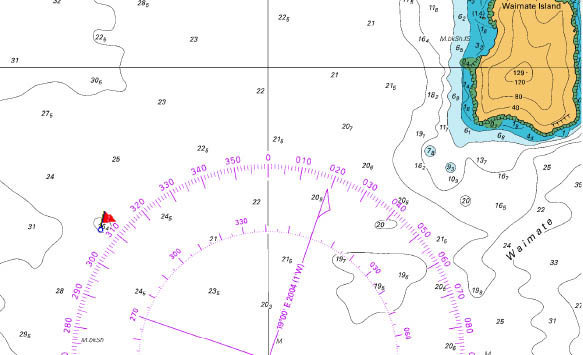 SIXTEEN METRE REEF
Hauraki Gulf
GPS 36-46.555 S 175-23.289 E
Approximatly three and a half kilometres to the west of the Waimate Channel is Sixteen meter reef which rises from 25 meters of the seabed to the east and dropping of to 30+ meters on the western side of the reef. The best fishing is on the western side of sixteen meter reef. This is a good place to strayline big baits for large snapper particularly on a calm day as you can fish the current on any tide. We usually put a weighted livie out to for kingfish as some nice kings patrol the reef. 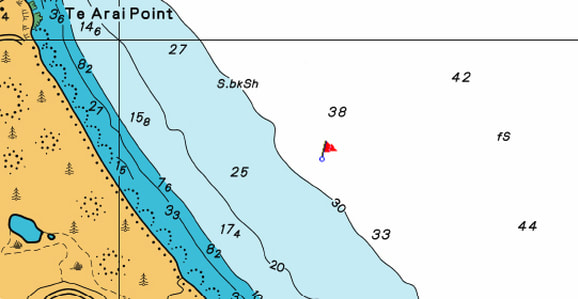 PAKIRI DRIFT
​A great general area for drift fishing in summer particularly in light winds but if the wind is up a decent drouge should be able to keep your drift speed in check.  Use lightly weighted lines, long traces and whole pilchards, mullet or skipjack cut baits. Drift in depths from 10-40 metres  as this is where the worm beds are  and you will come across the correct depth for the day with a bit of persistence or doing a bit of reconnaissance with your sounder first.